Job growth exceeds expectations, but Biden isn’t gloating over it

Job growth exceeds expectations, but Biden isn’t gloating over it 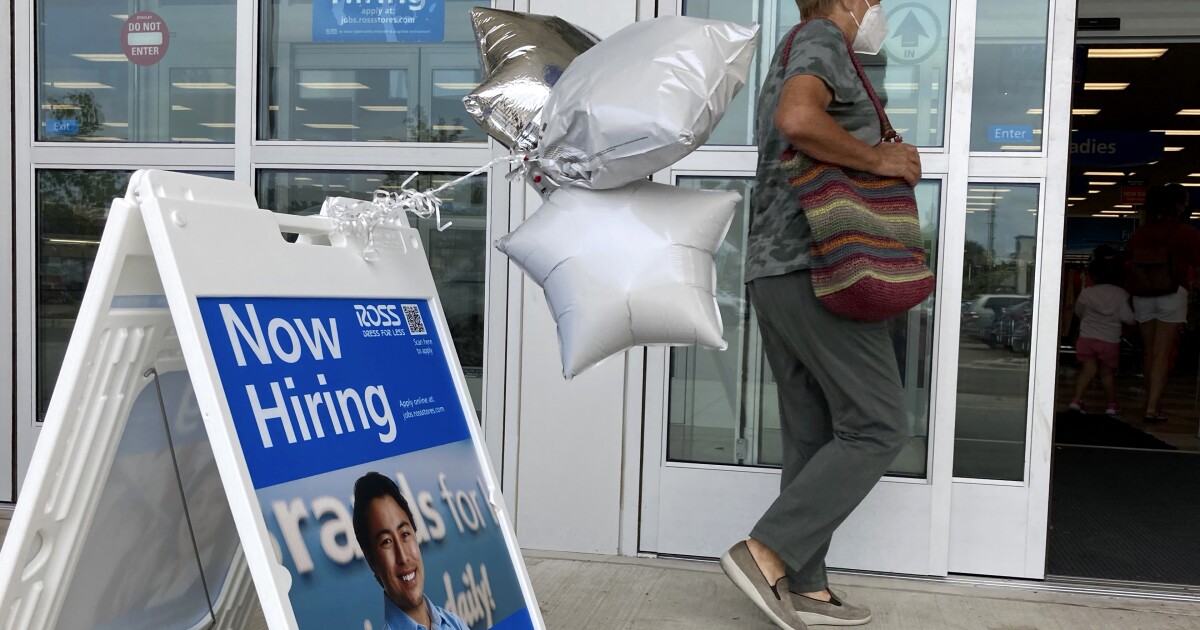 President Biden took a restrained victory lap Friday after receiving the best jobs report in nearly a year, and urged Americans to get vaccinated to prevent a resurgent coronavirus from jeopardizing the country’s economic recovery.

“My message today is not one of celebration,” Biden said. “It’s one to remind us we have a lot of hard work left to be done.”

The report from the Labor Department showed a hiring surge in July, with American employers adding 943,000 jobs and the unemployment rate dropping to 5.4%. The news was a relief to policymakers and economists who’d feared the data might reflect the damaging effects of the Delta variant and continued supply bottlenecks and labor shortages. And, make no mistake, it was welcome news inside the White House.

Biden’s somewhat tempered reaction underlined the broader uncertainty about the pandemic amid a fourth wave of cases. It also highlighted an awareness that, ironically enough, rapid job growth could jeopardize his push in Congress to make sweeping investments in additional subsidies and tax breaks for working families.

Republicans, who oppose that plan, have already started attacking the administration over rising inflation amid a surge in demand for things like used cars and hotel rooms. They argue that spending trillions on new benefits for the middle class — including subsidized preschool and community college — is unnecessary and likely to overheat the economy.

“Biden and the Democrats are out of touch with the reality facing all Americans: Their money is worth less and less,” said Emma Vaughn, a spokesperson for the Republican National Committee, in a statement.

Democrats counter that more work remains to recover from the shutdown that began in spring of last year and led to the deepest economic contraction since the Great Depression. The Democrats’ proposed $3.5 trillion in subsidies for families and workers, Biden argues, will stabilize the economy over the long term.

With the 943,000 payroll jobs added last month — and almost the same number in June — the economy has regained about three-quarters of the 22 million jobs lost in March and April of last year.

The new jobs report suggests an easing of the labor crunch as employers stepped up pay, on top of other incentives such as sign-on bonuses, to attract workers who have been slow to return to the job market. For all private-sector employees, average hourly wages rose 4% in July from a year earlier, and the rate of increase was running at double that pace for restaurant workers.

“The American labor market continues to make impressive progress, particularly since May,” said Leslie Preston, senior economist at TD Economics, part of TD Bank Group. “If the pace of hiring over the last three months continues,” she added, “all jobs lost due to the pandemic would be regained in seven months.”

That’s a big if, given the Delta variant and the risk that consumers may pull back in the face of renewed public health warnings and mask mandates. Another month or two of solid job gains, however, will probably prompt the Federal Reserve to start withdrawing some of its economic stimulus earlier than initially thought by economists.

The Fed is closely watching data on the labor market, as well as inflation, which has picked up significantly in recent months thanks to pent-up demand and widespread supply and delivery constraints. Leisure and hospitality businesses led all sectors in hiring last month, adding 380,000 to their payrolls.

“Even as summer vacations and warmer weather brought jobs back to hospitality and leisure, these gains could now be threatened again as the Delta variant spreads and people again refrain from travel, social or entertainment activities — especially indoor,” said Nicole Goldin, a nonresident senior fellow with the Atlantic Council’s GeoEconomics Center, in a research note.

Even though unemployment has fallen sharply since hitting 14.8% in April of last year, millions more people are still unemployed, and many others remain on the sidelines of the job market, in part because of uncertainties over the pandemic.

“The lack of vaccine for kids under 12 and inconsistency of school mandates as COVID spikes jeopardizes what was once assured to be a vibrant in-person back-to-school season, potentially hindering rehiring in education and continuing to keep women out of the labor force,” Goldin said. “The inequalities we’ve been experiencing on gender, racial or generational levels are likely to remain relatively unabated.”

With infections surging again, Biden focused his remarks less on what he described as “the fastest [economic growth] in 40 years” and more on the real possibility that the virus puts all of it in jeopardy. Acknowledging that “cases are going to go up again before they come down,” he lamented a “pandemic of the unvaccinated” that’s “taking a needless toll” on the country.

Expressing optimism, he encouraged unvaccinated Americans to get the shots.

“America can beat the Delta variant just as we beat the original,” he said.