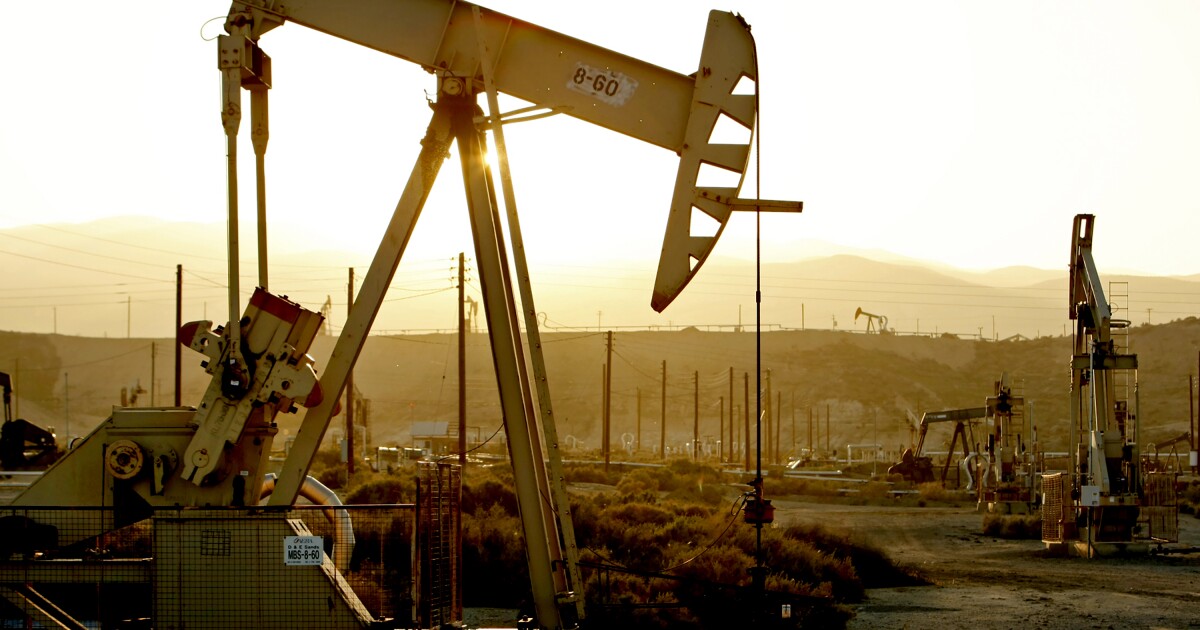 As expected, a Central Valley county approved a plan Monday to fast-track drilling of thousands of new oil and gas wells over the next 15 years, over the objections of environmental groups and people who live near oil fields.

The Kern County Board of Supervisors voted 5-0 to approve a revised ordinance supported by the influential petroleum industry that creates a blanket environmental impact report to approve as many as 2,700 new wells a year.

The revision was necessary after a state appeals court ruled last year that a 2015 ordinance violated the California Environmental Quality Act by not fully evaluating or disclosing environmental damage that could occur from drilling. New drilling permits were not issued while the county returned to the drawing board.

County Planning Director Lorelei Oviatt said the new plan, which now fills 72 binders of documents, made 87 revisions, including creating larger buffers between homes and wells, muffling noise during drilling and putting a stricter limit on the number of new wells.

“What we project is the worst-case scenario on many issues,” Oviatt said, adding that actual permit numbers in recent years were below the cap.

Hundreds of people spoke by phone in favor of or against the ordinance or in voicemails played during a daylong public hearing livestreamed from the board’s Bakersfield chambers.

Petroleum producers, oil company workers and industry and business groups spoke in favor of the measure, saying it would support high-paying jobs and produce oil under some of the most stringent environmental laws, instead of relying on dirtier imports.

Catherine Reheis-Boyd, president of Western States Petroleum Assn., said the group supported the plan because it provided certainty by streamlining the process even though it had “introduced many new restrictive and costly requirements and mitigation measures.”

Environmentalists, residents and one farmer opposed the ordinance, saying it would clear the way to rubber-stamp permits and does not address concerns spelled out by a unanimous 5th District Court of Appeal in Fresno.

In a joint statement, several local environmental leaders said they will continue the fight by calling on state lawmakers and regulators to pass measures that would bar wells near homes, schools and hospitals.

Many opponents, including several people speaking Spanish, spoke about how more oil drilling would exacerbate the notoriously bad air pollution in the San Joaquin Valley and make asthma cases worse.

“It is ludicrous to think that a singular environmental impact report can adequately determine the health impacts of oil and gas drilling,” she said. “The people of Kern County should not be sacrificed for profit. Oil executives would have you believe that the only way to see our community prosper is through continued dependence on the oil industry. That is not true.”

But supervisors argue that the local oil and gas industry had financial and environmental benefits.

Supervisor Leticia Perez said the oil and gas industry has represented a way out of “the incredible shame and degradation of intergenerational poverty,” especially for Latino families.

“Why would we import more when we can produce it here safely and cleaner than anyone else in the world?” he said.

Kern County, about 100 milesnorth of Los Angeles, is the state’s leading fossil fuel producer and also a major agricultural area. About 1 in 7 workers in the county of 900,000 has a job tied to the oil industry.

The ordinance came up for discussion as the industry faces challenges from lawmakers as well as ever-present opposition from environmental groups for creating air and water pollution and significant contributions to climate change.

Gov. Gavin Newsom ordered a ban on the sale of new gas-powered passenger cars and trucks by 2035. New legislation would ban all fracking by 2027, limiting a technique by energy companies to inject water, sand, gravel and chemicals in the ground at high pressure to extract hard-to-reach oil and gas.

The controversy over the ordinance started when the county amended its zoning code in 2015 to allow it to approve new oil and gas extraction permits after a review determined that applications would meet requirements set by a blanket environmental impact report. Environmentalists argued that a one-size-fits-all approach didn’t address different factors that vary by location such as habitat or proximity to neighborhoods.

The ordinance was designed to avoid costly, time-consuming environmental reviews of individual wells and was approved despite “significant, adverse environmental impacts,” the appellate court said.

Keith Gardiner, a farmer who successfully sued the county, said the new plan still falls short of providing protection for valuable agricultural land, which was one of the court’s findings. He said the county had wasted valuable time and spent millions of dollars supporting its flawed environmental impact report (EIR).

“Whose fault is it?” Gardiner asked. “There are those that will say it’s my fault, and the fault of the environmental groups. Don’t blame us. This is your EIR. The courts have found it’s your fault for not following the law.”

Tags: Los Angeles News
Previous Story
Column: If this is the best banks can do to prevent fraud, we’re in a lot of trouble
Next Story
Clearview AI uses your online photos to instantly ID you. That’s a problem, lawsuit says