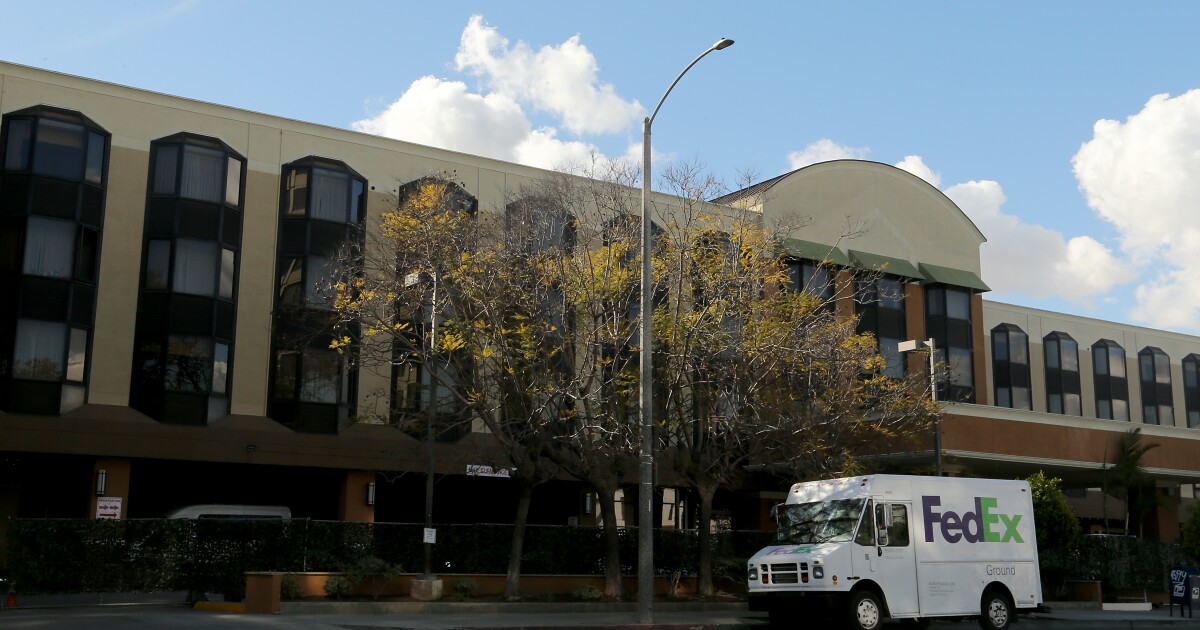 A Los Angeles County-owned hotel used to quarantine people with COVID-19 failed to follow pandemic safety protocols and properly train housekeepers to protect themselves against the coronavirus, according to a complaint filed with the state.

A 71-year-old housekeeper working at the facility tested positive for the virus and died in January while the building — a former Holiday Inn in Long Beach — was being used as a quarantine site, according to the complaint by Unite Here Local 11, the union that represents Southern California hotel workers. The union filed the complaint Thursday with the California Division of Occupational Safety and Health, known as Cal/OSHA.

“I didn’t feel safe,” said Maria Borja, who has worked as a housekeeper at the hotel for four years. “You don’t know if the virus is flying around there.”

She said the trash and linens from the rooms of the quarantined guests were supposed to be handled separately from other trash and linens. But she said supervisors often told housekeepers to ignore the rules to save time and money.

The complaint accuses the companies hired by the county to run the facility — Advance Nursing Services and Holliday’s Helping Hands Inc. — of neglecting to perform health screenings of workers as often as the facility’s own protocols required; of not offering COVID-19 safety information in Spanish, the primary language of most of the workers; and of failing to improve training even after housekeeper Margarita Maciel died.

In addition, the contractors running the facility failed to enforce social distancing requirements issued by the state and to ensure that employees wore face masks indoors during lunch breaks and staff meetings, the complaint said.

“Immigrant workers staffing essential jobs at the epicenter of the pandemic deserve safety protections, and when they courageously speak out about their conditions, we must support them,” said Kurt Petersen, co-president of Unite Here Local 11. The group is asking that Cal/OSHA investigate the allegations.

A representative for Holliday’s Helping Hands said the company takes safety concerns seriously and would conduct an internal investigation “to ensure that all of our employees are safe.”

A call to Advance Nursing Services was not returned Thursday.

A representative for the county’s Homeless Initiative — which was involved in buying the hotel — said he had not seen the complaint and could not comment.

The Long Beach hotel was one of 10 buildings that the county purchased as part of Project Homekey, a state-funded effort to buy underused hotels to provide housing for homeless families and individuals.

The county bought the 134-room hotel in December for $20.5 million and initially used it as a place where people who tested positive for the coronavirus could stay to not risk infecting their families or friends. In February, the county converted the building into a transitional living facility for homeless adults.

Unite Here also complained Thursday in a letter to the Los Angeles County Board of Supervisors that some of the housekeepers who worked at the Holiday Inn were not hired to stay on when the facility was converted. The union contended that this violates a worker-retention rule that Long Beach adopted last May. It said 13 housekeepers who had worked at the hotel before the county bought it should be offered their old jobs back.

Los Angeles County can’t rehire the workers because it’s not the employer, said Phil Ansell, director of the county’s Homeless Initiative: The facility is operated by the contractors hired by the Department of Health Services. He added that the county has encouraged the contractors to interview all previous employees who are interested in working at the site.

A representative for Holliday’s Helping Hands declined to comment about the worker-retention rule.

Nidia Cardona, a mother of two who worked at the Holiday Inn for three years before she was laid off in March 2020, said she has since been working in a warehouse in Wilmington, moving heavy boxes in and out of truck containers.

The new job pays slightly more than the $14.97 per hour she earned at the hotel but the work is harder and the commute from her Long Beach home is longer, she said.

“I hold out hope that they will soon call us to return to our old jobs,” Cardona said.

Unite Here filed a complaint last month with Cal/OSHA against the JW Marriott Santa Monica Le Merigot, claiming that the hotel failed to follow the state’s COVID-19 regulations, including protocols on cleaning and adequate training. Representatives for the hotel owner could not be reached for comment.

A county database that tracks citations issued against businesses for violating COVID-19 safety protocols found 15 citations against hotels since September.

Tags: Los Angeles News
Previous Story
$69 million for digital art? The NFT craze, explained
Next Story
Column: What we’ve learned — and what we still don’t know — after our pandemic year