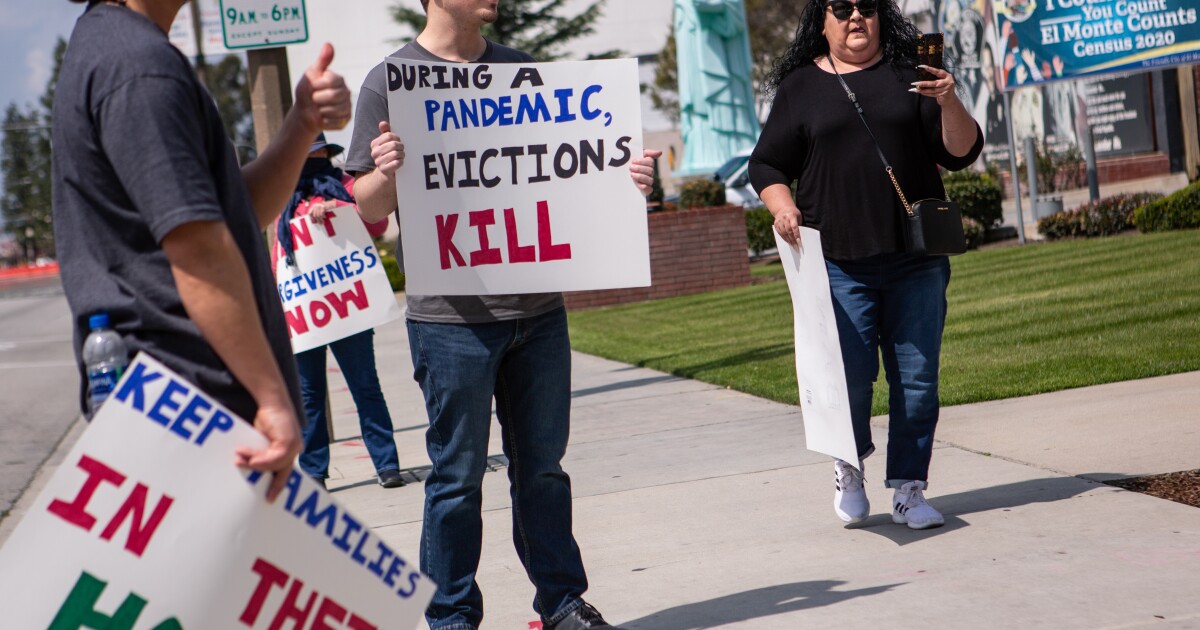 Some California eviction protections expire this week, but low-income tenants who are behind on their rent can continue to hold on to their housing by applying for a state rent relief program, officials said Monday.

State law adopted in response to the COVID-19 pandemic protects low-income tenants from eviction if they pay at least 25% of their rent, but that safeguard is set to end Thursday. Still, state officials note that a program that pays 100% of back and future rent for low-income tenants will continue accepting applications after Thursday until it doles out all of the $5.2 billion available from the federal government.

The state tenant law approved this year also blocks landlords through March 31, 2022 from getting a court order for eviction in cases in which tenants have completed a rental assistance application.

“We urge anyone who owes back rent or who will have problems paying upcoming rent to apply as soon as possible, but no one should fear that the rent relief program is going away any time soon,” said Gustavo Velasquez, director of the state Department of Housing and Community Development.

The COVID-19 pandemic resulted in state health orders that forced many businesses to temporarily close or scale back operations, costing millions of Californians income they needed to pay their rent.

In response, the state Legislature and Gov. Gavin Newsom approved protections against evictions through Sept. 30.

The state is distributing more than half of the federal funds, and the rest are being handed out by counties.

The state has paid out $650 million of its share as of Monday, providing rent relief to 55,000 households, according to Lourdes M. Castro Ramírez, secretary of the state Business, Consumer Services and Housing Agency.

State officials have faced criticism for being slow in rolling out the program. Officials said they will continue taking applications and paying rent owed by tenants in danger of being evicted until all of the available funds are distributed.

“Applying for rental assistance is the best way to protect yourself from being evicted,” Castro Ramírez said during a news conference Monday at Shelter Inc., an organization in Concord, Calif., that helps families avoid and escape homelessness.

Advocates for tenants say many fear eviction if they are unable to get help.

Some 744,000 California households still owed an average of $3,500 in back rent in August, according to an analysis by PolicyLink and the USC Equity Research Institute.

United Way Bay Area, which is involved in the rent relief program, said 56% of the households in the region surveyed by the U.S. Census Bureau face potential eviction, with a large majority of Latino households saying they are “somewhat” to “very likely” to face eviction in the next two months.

“We are tremendously worried about escalating evictions in the coming months,” said Amy Schur, a spokeswoman for the Alliance of Californians for Community Empowerment, which advocates for tenants. “Too many landlords and tenants do not know or understand that no eviction due to unpaid rent during COVID should take place through March 2022, given the availability of rental assistance to cover this debt.”

Although millions of Californians have been able to avoid eviction because of state action, it has been difficult for many tenants to get longer-term help, according to Kevin Zwick, chief executive of United Way Bay Area.

“With the moratorium expiring, rental relief programs for vulnerable households are more important than ever, but there are still too many barriers to getting the funds to those who need them the most,” Zwick said.

Danita Churchill, a former teacher and senior-center supervisor from East Palo Alto, said the economic upheaval of COVID has been stressful.

The state has paid two months of the rent she owes after she lost work, but she said she may need additional help as she continues to build her income while working part time and going through the adoption of her 7-month-old grandson.

“Jobs are not paying what they need to pay,” she said.

Advocates for landlords are relieved that the eviction moratorium ends this week but say the state needs to do more to make owners of housing whole for rent not paid by tenants.

Under the state law, landlords are also prohibited from going ahead with an eviction through next March unless that landlord has applied for rental assistance funding, according to Debra Carlton, executive vice president of the California Apartment Assn., which represents landlords.

“California has had an eviction moratorium for non-payment of rent for the past 18 months, and the hardship on many housing providers has been devastating,” Carlton said. “Many housing providers have not received rent payments necessary to pay the mortgage, pay taxes, pay insurance and to perform ongoing maintenance at their property.”