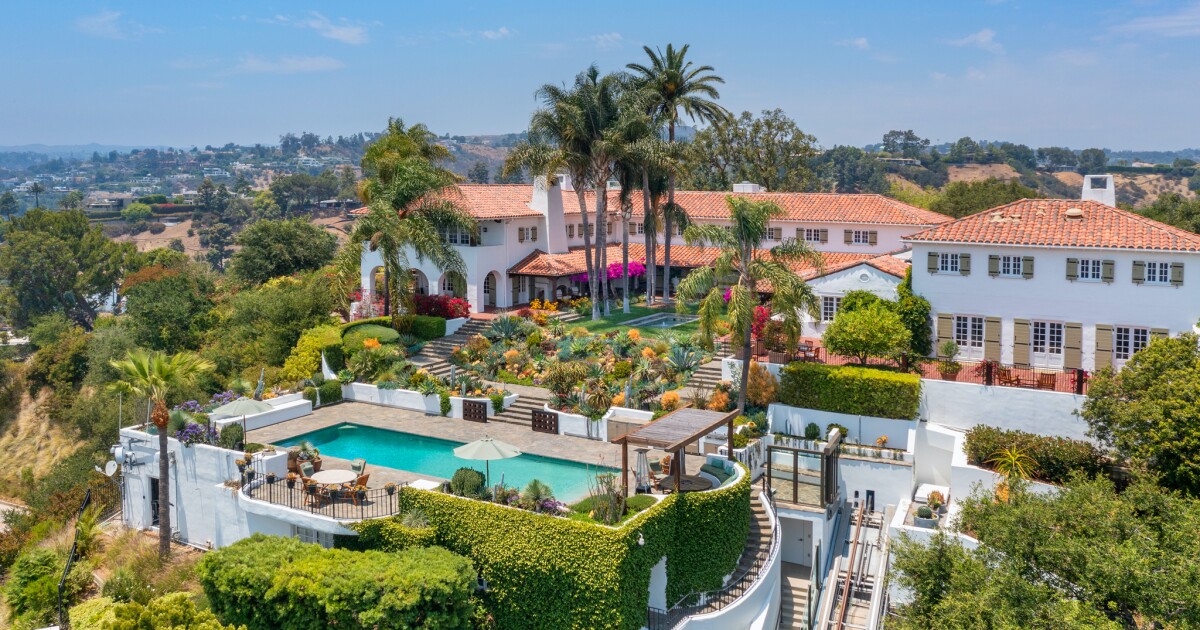 When Microsoft Corp. co-founder Paul Allen died in 2018, he left behind a country-spanning collection of prized real estate including an expansive ranch in Idaho, a Manhattan penthouse, a Bay Area mansion and a glut of waterfront homes near his native city of Seattle. His latest home just surfaced for sale in Beverly Hills Post Office: a lavish hilltop residence that’s up for grabs at $55.5 million.

The dramatic Spanish-style retreat is Allen’s second property currently available in the 90210. A few miles west, his legendary piece of land known as Enchanted Hill — a 120-acre undeveloped parcel overlooking the city — is listed at $95 million.

Another highlight is the funicular, a glass-lined box that runs from the pool deck to the tennis court at the bottom of the property.

A romantic courtyard approaches the main home, which wears its Spanish style on its sleeve with an exterior of white stucco and clay tile. Inside, an architectural staircase spirals its way to spaces including a wood-beamed living room, chef’s kitchen, library and gym with a massage room.

One of five bedrooms in the main house and one of 10 bedrooms total, the primary suite adds a pair of spacious closets and a limestone fireplace. Decks and balconies hang off the top level, taking in views of the palm-topped grounds and the city below.

Allen, who died in 2018 at 65, founded Microsoft with Bill Gates when he was 22. After leaving the company eight years later with what would become one of the largest fortunes in U.S. history, he devoted his life to philanthropic causes and investments that included sports franchises as well as space travel and technology.

His other prized possessions include a Soviet-era MiG-29 fighter jet and a 414-foot superyacht called Octopus, which listed for sale in 2019 for about $326 million. Last year, his 21,000-square-foot mega-mansion in the Silicon Valley enclave of Atherton traded hands for $35.25 million.

Tags: Los Angeles News
Previous Story
CEOs promised to cut their pay during the pandemic. Here’s how they wound up earning more
Next Story
Don Rickles’ Century City villa is selling for $6.5 million