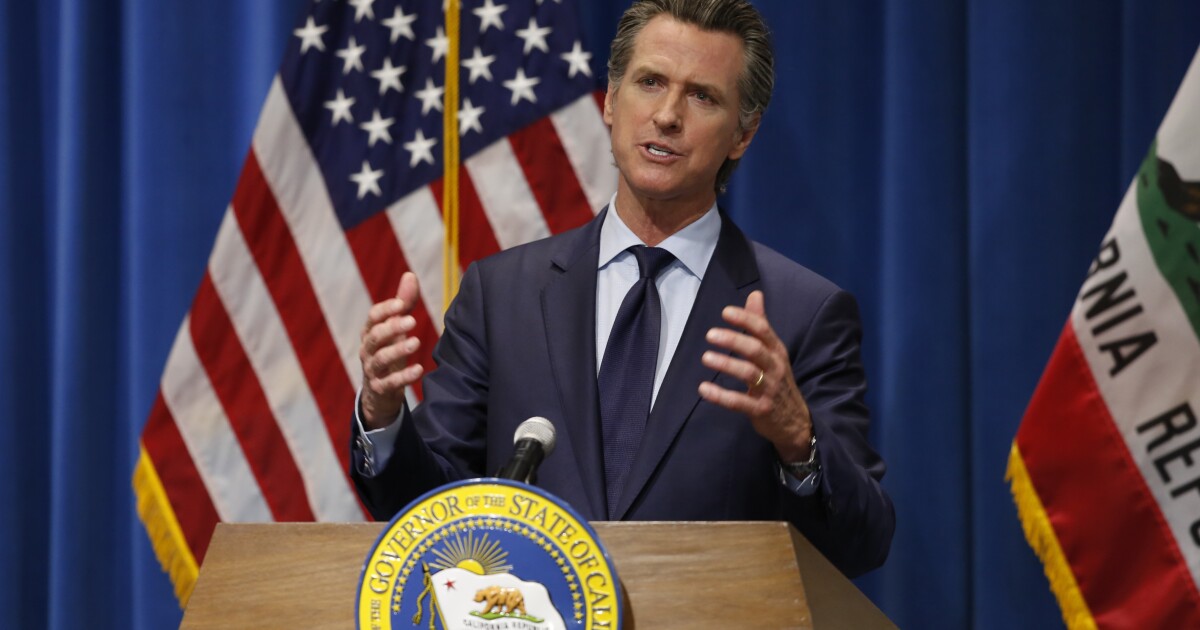 Gov. Gavin Newsom proposed a second round of $600 state stimulus checks on Monday to hasten California’s recovery from the COVID-19 pandemic, hoping to expand the payments from low-income residents to also include middle-class families, saying that doing so would benefit two out of three state residents.

The proposal to deliver $8 billion in new cash payments to millions of Californians is part of a $100-billion economic stimulus plan made possible in part by a budget that has swelled with a significant windfall of tax revenues, a surplus the governor put at $75.7 billion. Newsom also proposed $5 billion to double rental assistance to get 100% of back rent paid for those who have fallen behind, along with as much as $2 billion in direct payments to pay down utility bills that are overdue.

“Direct stimulus checks going into people’s pockets and direct relief — that’s meaningful,” Newsom said during a visit to the Unity Council, a nonprofit social equity development corporation in the Fruitvale neighborhood of Oakland.

Under the governor’s proposal, which still requires approval from the Legislature, households earning up to $75,000 in adjusted gross income will be able to receive the second round of stimulus payments. The expanded program would provide financial assistance to two-thirds of Californians.

In addition to the $600 stimulus checks for eligible Californians, the governor proposed that families with children would get an additional $500.

The payments are part of what Newsom is calling a California Comeback Plan, pitched by a governor who is fighting a Republican-led campaign to recall him from office. The state recently announced that the proponents of the recall turned in sufficient signatures to put a vote on the statewide ballot this fall.

Millions of Californians lost jobs or income since the pandemic began more than a year ago and the state ordered businesses to restrict operations and people to stay home. As vaccines and social-distancing have significantly reduced the spread of the virus, the state is poised to reopen much of its economy by June 15.

Still, many Californians are still struggling to pay rent and cover other expenses.

Oakland Mayor Libby Schaaf welcomed the new round of financial help, which she said is “an unprecedented moment where government is coming to the aid of those who need it the most.”

“Oakland is a city that has been hit hard by this pandemic,” she said. “Direct aid to people is what is going to get our economy roaring back.”

Newsom’s proposal is supported by Chris Iglesias, the chief executive of the Unity Council.

“We are not going to leave anybody behind during this pandemic,” he said at the news conference. “We need that recovery.”

This would be the second round of state stimulus checks proposed by the governor. In February, the governor signed legislation to provide 5.7 million low-income Californians with $2.3 billion in state stimulus checks. The money was provided for residents including those earning $30,000 a year or less who receive the state Earned Income Tax Credit. It also went to people who file tax returns with an individual taxpayer identification number but who don’t have a Social Security number, the bulk of whom are immigrants in the country illegally.

Families that file with an identification number and receive CalEITC have been eligible for up to $1,200 in the first round. The state said this month that so far 2.5 million Golden State Stimulus payments worth $1.6 billion have been issued.

“We passed the recovery package to get money into the pockets of Californians who were hit hardest by this pandemic, and that’s exactly what the Golden State Stimulus is doing,” Newsom said on May 6, noting that some Californians have not yet filed their 2020 taxes and may still qualify.

State officials said the cash payments were triggered in part by a 1979 voter-approved state constitutional amendment that requires tax rebates when revenues exceed a cap on government spending. That appropriations limit, loosened by subsequent ballot measures, has been significantly higher than state spending levels for the better part of the past four decades — allowing lawmakers to exclude billions of dollars in spending from the final calculation.

This year, awash in cash from a tax windfall and facing a historic slowdown in population growth used to determine the maximum spending allowed, the Newsom administration projects $16 billion in excess revenue. By law, half of that must go to public schools and the other half to taxpayer rebates — in this case, targeted toward middle-class adults and families.

The budget windfall was created by factors including $26 billion in federal aid and a roaring stock market.

“That budget surplus is going back to the most vulnerable Californians, the ones who need help the most,” said Assemblyman Phil Ting (D-San Francisco), chairman of the Assembly Budget Committee, who joined the governor at the news conference in Oakland.

Tags: Los Angeles News
Previous Story
Patagonia shows corporate activism is simpler than it looks
Next Story
A teen who was bullied on Snapchat died. His mom is suing to hold social media liable