Newsom proposes grants up to $25,000 for thousands more California businesses hit by COVID

Newsom proposes grants up to $25,000 for thousands more California businesses hit by COVID 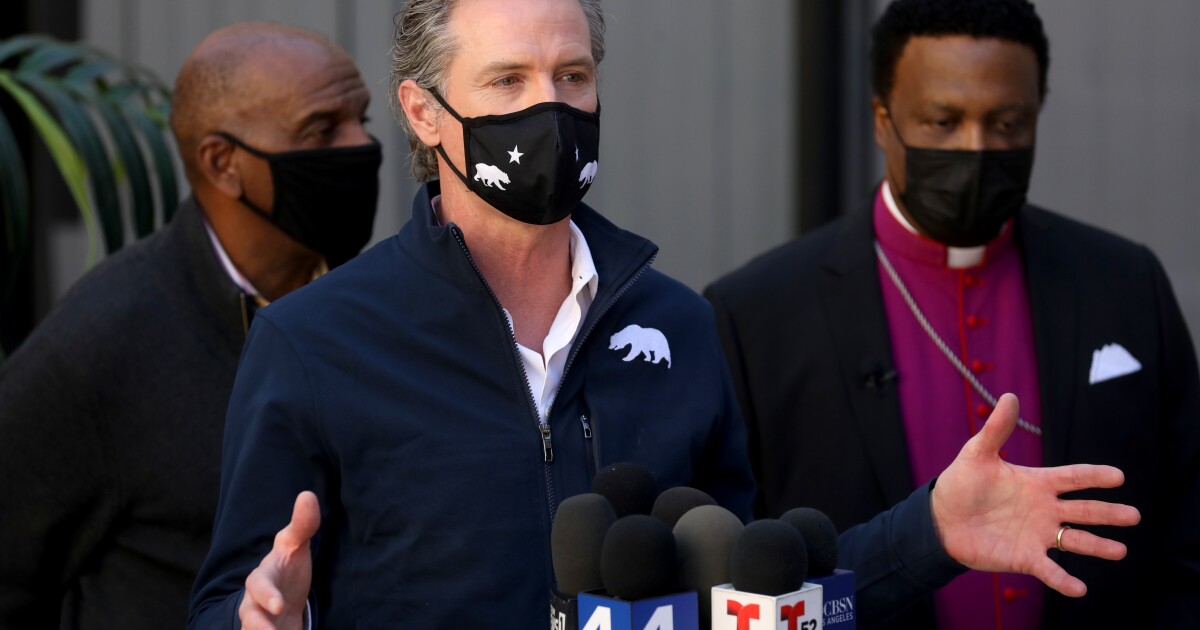 Gov. Gavin Newsom on Thursday proposed adding $1.5 billion to a program providing grants of up to $25,000 to small businesses harmed by the COVID-19 pandemic in California, allowing thousands more to get financial help.

The additional funds from federal COVID-19 aid to the state would bring the amount allocated in recent months for grants to $4 billion, which Newsom told business leaders would make it the largest state program of its kind in the country.

“Small businesses intimately understand the pain and stress of the last year — directly understand it — and the struggle now to reopen with all of the dust settling around us,” Newsom said during a virtual address to a meeting of the California Chamber of Commerce.

Officials estimate the $1.5 billion in additional funds, if approved by the Legislature, will provide grants to some 150,000 small businesses.

Even with the new funds, it is unlikely the grant money will be sufficient to help all of the California businesses suffering financially because of the pandemic, which led state officials in March to ask many of them to close or scale back operations to reduce the spread of the virus.

Still, business groups said additional financial help was essential even as the state was expected to emerge from most COVID-19 restrictions on June 15.

“This is welcome news for mom-and-pop owners in the state who have been hanging on for dear life this past year,” said John Kabateck, California state director of the National Federation of Independent Business. “They don’t need more debt — they need resources that will get their lights back on, people back to work and communities growing once again.”

The new funding proposal came during a week in which state officials said the state budget surplus had ballooned to a staggering $75.7 billion, allowing the governor to propose large amounts of additional financial resources for schools and housing for homeless people, and to provide $600 tax rebates to California taxpayers who make up to $75,000 annually. The state also is receiving $26 billion in federal COVID-19 relief aid, the governor noted.

The announcements have been made as Newsom faces a recall election in which several candidates wanting his job have accused him of mishandling the pandemic by shutting down businesses for too long.

Newsom’s proposals this week were criticized Thursday by California Republican Party Chairwoman Jessica Millan Patterson, who cast them as his effort to head off a recall.

“Gavin Newsom’s job-killing policies devastated small businesses during this pandemic, and now he thinks he can paper over facts with press conferences,” Patterson said. “Today’s announcement does nothing for the thousands of California businesses that have already shut their doors for good, costing owners their life savings and workers their employment.”

Newsom on Thursday also proposed boosting funding for the California Competes Tax Credit for businesses that create or retain jobs to $360 million annually, up from $180 million. The governor also wants to provide $250 million in grants to lure businesses to move to California, and $95 million for Visit California, to promote tourism in the state.

In January, Newsom launched the grant program with an executive order that provided $500 million for 21,000 small businesses.

In February, the Legislature and governor approved another $2.1 billion in grants, from $5,000 to $25,000, under a program administered by California’s Office of the Small Business Advocate.

So far, some 198,000 small businesses and nonprofits have been or will be awarded grants during the first two rounds of the program. State officials estimate that about 180,000 applications will remain unfunded.

The officials cited a survey by the advocacy group Small Business Majority that found 35% of small businesses were three months from closing if they did not get additional financial help.

Firms with an annual gross revenue of up to $2.5 million are eligible to apply for the grants. With demand outpacing available funds, applications are ranked and judged on criteria including whether the business is in an industry sector deemed most affected by the pandemic.

The state will also work to ensure that grants are distributed throughout California with a focus on assistance for businesses run by people of color.

More than 88% of the grants awarded so far have gone to businesses owned by people of color, women and veterans, or those that are located in low- to moderate-income communities, the governor said.

Grants have been finalized for 43,874 small businesses and nonprofits representing all 58 California counties for a total of $475 million.

Businesses that are notified they’ve been awarded a grant still must go through a process to verify their eligibility, and checks should be issued within 45 days, state officials said.

“Let’s not forget,” he said, “it is California’s successful businesses that have provided a once-in-a-generation budget surplus that will allow the state to address some of its most pressing needs.”