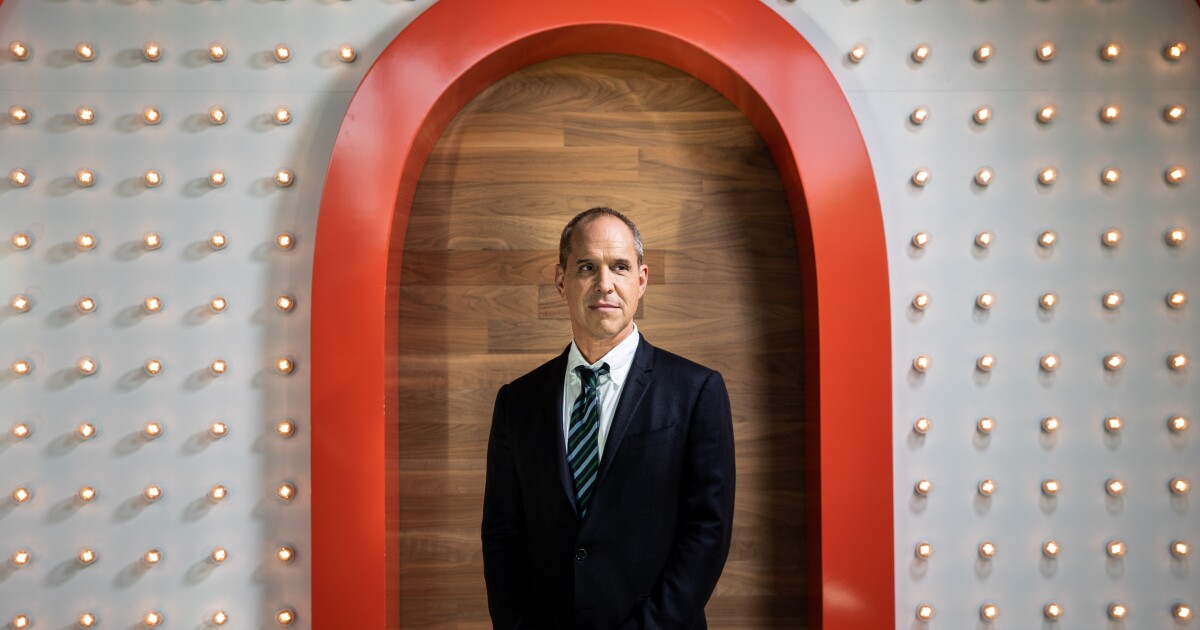 Paramount Pictures Chairman and Chief Executive Jim Gianopulos will step down from the ViacomCBS-owned studio, according to two people familiar with the matter who were not authorized to comment.

Parent company ViacomCBS is expected to name Brian Robbins, currently president and CEO of Nickelodeon, as Gianopulos’ replacement, the people familiar with the plans said. ViacomCBS could announce the appointment as soon as next week.

Robbins, an executive with chops honed in the worlds of digital entertainment and traditional film and television, is an ideal candidate for the job as ViacomCBS looks to the storied Paramount studio to help expand streaming services such as Paramount+.

A former actor and film director, Robbins is seen as a rising star within ViacomCBS. He took the job of president of Nickelodeon in 2018, putting him in the position of trying to revive a cable network that had long struggled to achieve the heights of its 1990s heyday. The following year, he was chosen for a larger role as president of kids and family entertainment for the combined ViacomCBS.

He will remain in charge of the firm’s Nickelodeon TV empire when he takes the reins at Paramount, one of the people familiar with the matter said.

Gianopulos joined Paramount in 2017 when Viacom was still separate from CBS. Viacom CEO Bob Bakish hired Gianopulos, who had earlier been pushed out of 20th Century Fox Film after a long run overseeing hits such as “Avatar” and “Deadpool.”

A respected executive known for his corporate skills, Gianopulos made it his mission to revive Paramount. The studio had struggled for years under Viacom’s prior leaders, who prioritized belt tightening and share buybacks, and was having trouble competing at the box office with rivals such as Walt Disney Co. and Warner Bros. that had heavily invested in film franchises.

Since then, the studio — known for its mountain logo, its famed gates on Melrose Avenue and classic films such as “The Godfather” — has weathered the merger of its parent company with CBS Corp., the COVID-19 pandemic and the rise of streaming that has fundamentally altered the business of movies.

Executives and agents credited Gianopulos with improving Paramount’s filmmaker relationships. The studio returned to profitability under his leadership. But his desire to protect movies and filmmakers from corporate mandates to boost the streaming business caused friction, people familiar with the matter said.

In contrast, Robbins is said to be more willing to embrace the digital revolution in Hollywood. Robbins is widely credited with the success of “Paw Patrol: The Movie,” based on the Nickelodeon show of the same name, which drove significant sign-ups to Paramount+ when it recently premiered on the platform at the same time as its theatrical release.

Before the pandemic shut movie theaters, Paramount had a major success with “Sonic the Hedgehog,” a live-action and computer animation hybrid based on the classic Sega video game. The May release of “A Quiet Place Part II” was a rare box office hit for an industry that had suffered persistently poor movie theater attendance as theaters tried to reopen. Other hits released under Gianopulos’ watch included the Elton John biopic “Rocketman” and the sixth “Mission: Impossible” movie.

Amid the continuing coronavirus crisis, Paramount delayed many of its biggest movies, including “Top Gun: Maverick” and “Mission: Impossible 7.” Paramount recently delayed the release of the “Top Gun” sequel, with Tom Cruise reprising his lead role, from November until May. “Snake Eyes,” a spinoff based on a G.I. Joe villain, flopped in theaters when it was released in July.

To manage through the pandemic, Paramount sold the Michael B. Jordan thriller “Without Remorse” and the Eddie Murphy sequel “Coming 2 America” to Amazon Prime.

ViacomCBS is making a push to compete in streaming with Paramount+, rebranded from CBS All Access earlier this year. The service, which costs $5 a month for its ad-supported tier, boasted it would have 2,500 films by the end of summer, including Paramount classics and movies from other studios.

Having new films at the same time as theaters has been a big boost to WarnerMedia’s HBO Max, which put its entire 2021 film lineup on the service and in theaters simultaneously; and Disney+, which released “Black Widow” and “Jungle Cruise” at the same time as multiplexes for a $30 charge. Universal Pictures’ “Halloween Kills” is going to parent company NBCUniversal’s Peacock and theaters at the same time in October.

Robbins, whose promotion was first reported by the Wall Street Journal, is said to have been interested in the Paramount job for some time. His career, which spans TV, film directing and digital media, helped make him a favored candidate within ViacomCBS, which is controlled by Shari Redstone, the daughter of the late media mogul Sumner Redstone.

The Brooklyn native began his career as a child actor in the 1980s, including in an ABC sitcom, “Head of the Class.” He directed films including “Varsity Blues” and “Norbit” and produced young adult shows, including “Smallville,” “One Tree Hill” and “What I Like About You.”

In 2012, Robbins, with his producing partner Joe Davola, built an online network called AwesomenessTV with game shows and sketch comedies to attract viewers who were turning away from Nickelodeon, MTV and Comedy Central and gravitating toward YouTube.

AwesomenessTV changed ownership multiple times and faced the same challenges as other companies that emerged during the short-lived boom of so-called multichannel networks. The company was bought by DreamWorks Animation, which was absorbed by Comcast Corp., which later sold AwesomenessTV to Viacom.

Though Robbins’ résumé includes multiple directing credits, one thing it lacks is experience running a major film studio. Whereas that would’ve once been seen as a mark against him, in the modern streaming era, it may have been an advantage, according to insiders.

Robbins is no stranger to Paramount. Before he joined Nickelodeon, he was head of Paramount Players, a unit of the studio created to mine Viacom cable brands such as MTV and Nickelodeon for film projects.

People who have worked with Robbins describe him as a modern and forward-thinking entertainment executive, willing to try out new ways of doing things and listening to employees’ ideas.

When he was running Paramount Players, for example, he championed an idea to put a twist on the Mel Gibson film “What Women Want” through the Black entertainment brand BET. Robbins’ division took the idea and made “What Men Want,” a revision of the concept from a Black female perspective, casting Taraji P. Henson and Tracy Morgan.

Tags: Los Angeles News
Previous Story
Wait times at Disneyland and Universal Studios are way down. Here’s why
Next Story
Column: Here’s why Biden’s vaccine mandate is right — and should stand up to legal challenges