Ruckus in the skies: What happens when airline passengers refuse to wear masks

Homepage News Ruckus in the skies: What happens when airline passengers refuse to wear masks
News

Ruckus in the skies: What happens when airline passengers refuse to wear masks 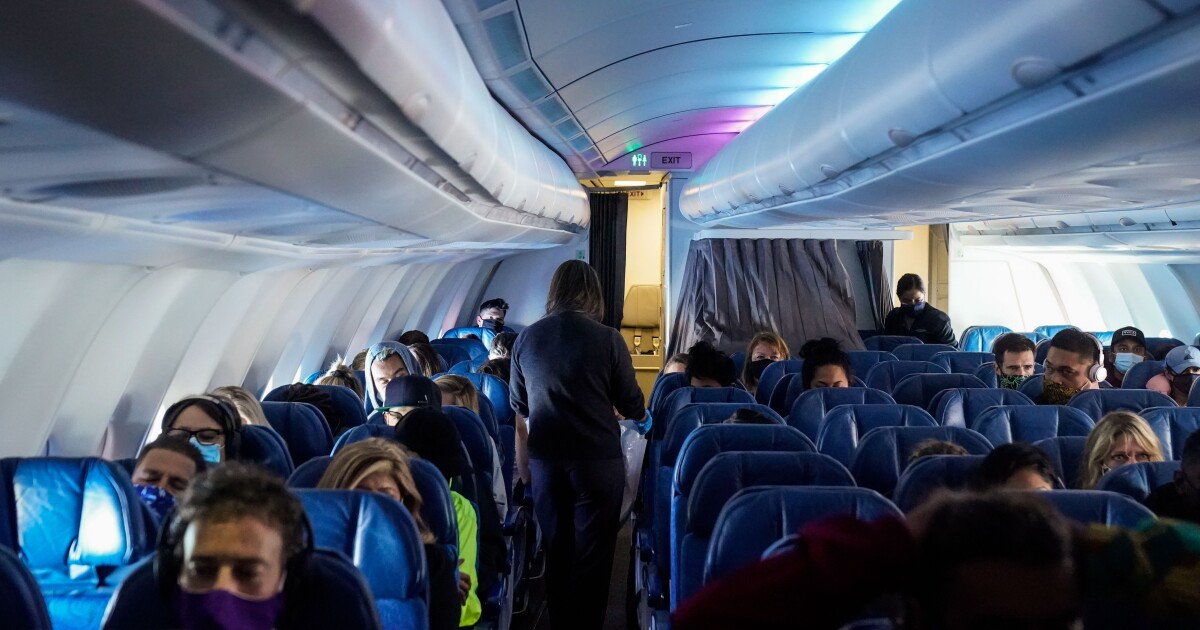 A passenger on a JetBlue flight from the Dominican Republic to New York refused to wear a face mask, threw food and an empty liquor bottle in the plane, shouted obscenities and hit a flight attendant in the arm, the Federal Aviation Administration said Wednesday.

A passenger on a Southwest Airlines flight about to take off from Chicago to Sacramento also refused to wear a mask, called two flight attendants who ordered him off the plane “pathetic” and hit one of the crew members with his luggage as he walked off, the agency said.

And then there is the flier on an Alaska Airlines plane preparing to fly from Bozeman, Mont., to Seattle who ignored repeated reminders to wear a mask, causing the plane to return to the gate, according to the FAA.

The incidents of passengers being unruly — ignoring crew members’ instructions, fighting and refusing to wear a mask — have been surging, according to the FAA, even while the number of Americans flying on commercial planes remains about 40% below pre-pandemic levels.

The rise comes despite a new federal law that makes wearing a mask on commercial flights mandatory, punishable by a fine of $250 for the first offense and up to $1,500 for repeat offenses. Before it became law, the nation’s airlines adopted mask-wearing policies, enforcing them by banning repeat offenders from flying.

The federal mask mandate, which began Feb. 1, was set to expire May 11; but the U.S. Transportation Security Administration recently extended it through Sept. 13.

“The physical and verbal abuse that flight attendants have been taking has been way off the charts,” Sara Nelson, president of the Assn. of Flight Attendants-CWA, AFL-CIO, told NBC News.

“The physical and verbal abuse that Flight Attendants have been taking has been way off the charts.” @FlyingwithSara says there will be no second chances for passengers who fail to comply with crewmember instructions that keep everyone safe. pic.twitter.com/YzXse6RphL

The rise also comes despite FAA Administrator Steve Dickson issuing a zero-tolerance order in January against unruly passengers. Instead of giving warnings or requiring unruly passengers to seek counseling, he said, violators will face criminal prosecution or fines of up to $35,000. The order took effect March 30.

“The FAA has recently observed a proliferation of such conduct,” he said in the order.

The FAA proposed civil penalties ranging from $9,000 to $32,750 against the passengers who the agency alleges refused to wear a mask and caused a ruckus in the incidents on JetBlue, Southwest and Alaska Airlines. Those incidents took place in January and February. The passengers, whose names were not released, can appeal the fines to an administrative law judge for the National Transportation Safety Board.

In January, three passengers who disrupted three separate flights on JetBlue and SkyWest airlines face civil penalties of $14,500 to $31,750, the FAA said. In all three incidents, the FAA said the passengers drank alcohol — which they’d brought with them onto the plane — to excess, caused a scene and shouted obscenities. Each passenger was escorted off the plane by local police upon arrival.

The number of passengers who have been banned from the nation’s airlines continues to rise.

Delta Air Lines appears to lead all U.S. carriers by putting on its internal no-fly list about 1,200 passengers who refused to wear a mask or became unruly on a plane. It is followed by Frontier Airlines with more than 830, United Airlines with about 750 and Alaska Airlines with 542. American Airlines and Southwest Airlines declined to disclose how many passengers they have banned.

The FAA typically enforces and imposes fines on up to 180 cases of unruly passengers a year. So far this year, the number of incidents referred by airlines to the FAA for enforcement has reached 1,300, with the FAA saying it has identified about 260 of those cases for potential enforcement.

“There’s absolutely no question there has been an increase,” FAA spokesperson Ian Gregor said.

The rise in on-board incidents comes as airlines are starting to see a gradual increase in travel demand, thanks in part to the vaccine rollout, a drop in coronavirus cases in several states, a loosening of local pandemic travel restrictions and the start of the peak summer travel season.

More recently, the FAA alleges that an American Airlines passenger assaulted a crew member Saturday on a flight from Miami to New York after refusing to wear a mask. Law enforcement officers met the plane when it landed, and American Airlines put the passenger on its no-fly list, the airline said.

And on March 17, three passengers on an American Airlines flight from Fort Lauderdale to Chicago were removed from the plane before takeoff after refusing to wear masks. The flight was delayed, and after the passengers got back to the gate, a fight broke out in the terminal, the airline said.

FAA officials say they have yet to complete investigations into the American Airlines incidents.