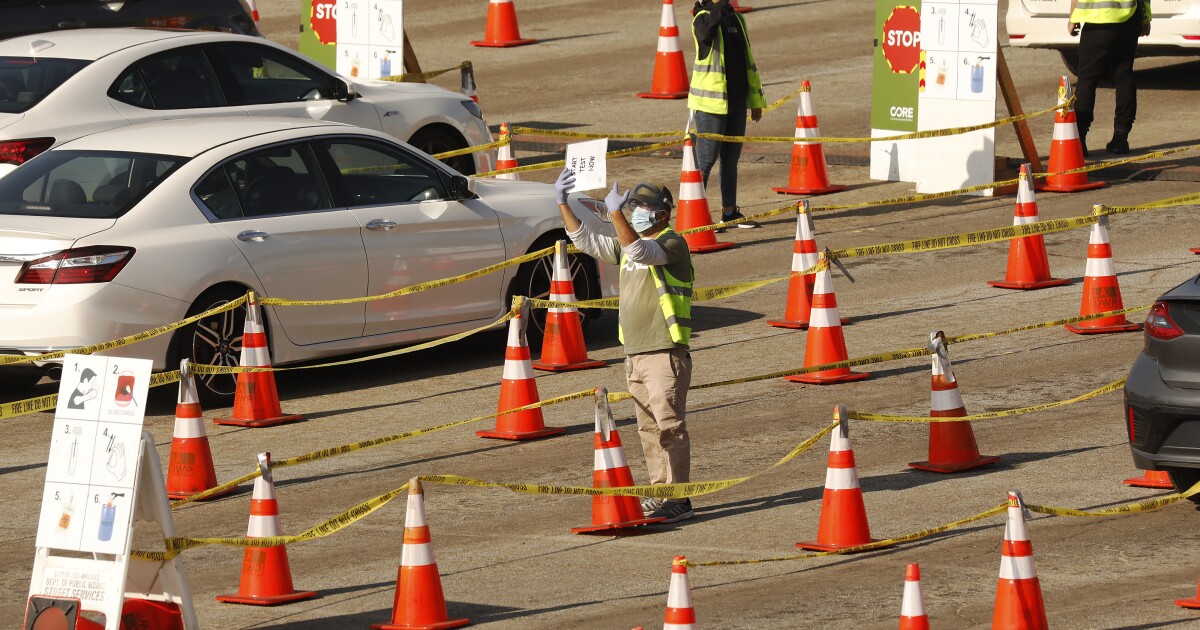 The lawyer who brought the charges said an internal email from Penn to his employees amounted to coercive conduct that could negatively affect young workers. Lawyers for the Oscar-winning actor are insisting that the claims are frivolous and without merit and are calling for their dismissal.

Penn’s nonprofit group, Community Organized Relief Effort, or CORE, assisted the city of Los Angeles at the mass vaccination site in January, earning praise for taking action during a critical moment in the pandemic when the city was transitioning from testing to vaccination.

But Penn and CORE quickly came under scrutiny after two anonymous commenters left disparaging remarks on a New York Times message board about the working hours and food provisions at the site.

The comments spurred Penn to write an impassioned, 2,200-word email in which he chastised the commenters.

“And to whoever authored these, understand that in every cell of my body is a vitriol for the way your actions reflect so harmfully upon your brothers and sisters in arms,” Penn wrote in the email, which was promptly leaked to The Times. “I have taken counsel and here will refrain from using the words with which I would otherwise choose to describe the character of your actions.”

The email also encouraged those who were unwilling to do the work to quit.

The words caught the eye of Los Angeles labor lawyer Daniel B. Rojas, who petitioned the NLRB to investigate whether the remarks constituted an unlawful threat.

Rojas said Friday that he was particularly concerned because many of CORE’s employees at Dodger Stadium were young people and people of color.

“When I read Mr. Penn’s letter, I flagged the contents as unlawful and became upset about the notion that, due to the impetuous conduct of an ultra-wealthy man, hundreds of young people in L.A. would be coerced into believing that discussing wages or working conditions with third parties is incompatible with continued employment in the nonprofit sector,” he said via email.

The NLRB’s complaint, dated Oct. 25, sided with Rojas, charging that Penn had “impliedly threatened” employees with reprisals and discharge during his screed.

But Penn and CORE are pushing back. Their attorney, Mathew Rosengart, confirmed Friday that the group refused a settlement offer with the NLRB based on the “utter lack of legal merit” of the charges, and noted that no CORE employees or unions protested Penn’s statements.

“CORE and Mr. Penn completely stand by his email, and the NLRB’s actions to distract CORE from its crucial mission for a case where no employees were harmed, are shameful,” he said in a statement, adding that the group will “vigorously contest and fight the baseless charge in the legal system.”

Rosengart said the comments from Penn’s email were “cherry-picked” and failed to account for the larger context, which also included ample praise for CORE’s employees and vivid descriptions of Penn’s own distress during the deadly winter surge of COVID-19.

The email in question was a “rallying cry to CORE’s employees, profusely thanking them and expressing great pride for their hard work and lifesaving, emergency services,” he added.

The anonymous comments that drew Penn’s ire were attached to a New York Times story about the Dodger Stadium vaccination site, and might have disappeared into the ether of the Internet were it not for his response.

One commenter took issue with the story’s description of “Krispy Kreme for breakfast and Subway for lunch” for site workers.

“We usually DON’T get breakfast, just coffee,” the commenter wrote. And the lunch is “NOT” Subway, but “the same old lettuce wraps every day.”

The other, a self-described CORE staff member, said that in order to comply with Mayor Eric Garcetti’s push to switch the site’s operations from COVID-19 tests to vaccinations, employees worked 18-hour days, six days per week, “without the opportunity to take breaks,” a claim Penn’s camp denied.

Attorneys for Penn also noted that CORE was working closely with and at the behest of the city. Penn said in his email that the city did not order CORE staff to work excessive hours, but acknowledged that the “extraordinary staff and volunteers” strived to meet a “quantifiable urgent need” during a critical inflection point in the pandemic.

“You rose up. You did. Not me. All of you. And I will admit something. It made me weep. Not with some stupid self-presumed sense of fatherly pride, but simply a human pride in experiencing that people like you exist,” he wrote.

Reached by phone, Rojas said he was not able to confirm whether the anonymous commenters were actual CORE employees, but noted that “the NLRB considered that as an issue and decided that it doesn’t matter,” because employees were the ones who received his email.

Penn, a polarizing figure in Hollywood, founded CORE after the destructive and deadly 2010 earthquake in Haiti. The group continues to work in Haiti and has since provided humanitarian aid after hurricanes in North Carolina, Florida, Puerto Rico and the Bahamas.

During the pandemic, the group helped run dozens of COVID-19 testing sites across the country.

CORE relies on a small amount of government funding and on charitable donations, including a $30-million contribution from Twitter founder Jack Dorsey, CORE co-founder and Chief Executive Ann Lee said in an interview last year. Penn takes no salary from the group, according to its federal tax filings.

Rojas said he was hopeful that CORE would “reconsider its position, manage a bruised ego and settle the case,” noting that the remedy for the violation does not involve a monetary settlement but instead an agreement to cease and desist from further violations, an official declaration of wrongdoing and a notice to affected employees.

“Simply put: I filed the charge because it’s protected activity, not ‘broad-based cyber whining,’ to discuss your wages or working conditions with the public,” Rojas said. “This is particularly true where an employer — like CORE — is reliant on public funds. These are our tax dollars at work.”

Yet Rosengart similarly characterized the charges as a waste of federal resources and taxpayer dollars and said it is distracting CORE from its mission. The group has helped administer nearly 6 million COVID-19 tests and 2.5 million vaccinations in Los Angeles and around the world with a focus on underserved, low-income groups and communities of color, he said.

Jennifer Abruzzo, general council for the NLRB, said in a statement Friday that although CORE “engages in important and admirable work, like all employers, it must respect the right of its employees under the National Labor Relations Act to engage in protected concerted activities, such as discussing matters of mutual concern with one another and bringing workplace concerns to the public, federal agencies, or other third parties.”

A hearing before an NLRB administrative law judge is slated for January in Los Angeles.

Tags: Los Angeles News
Previous Story
Column: There are a great many good things in Biden’s latest plan. Why describe it as a failure?
Next Story
Obamacare open enrollment begins. Find out if you qualify for higher subsidies