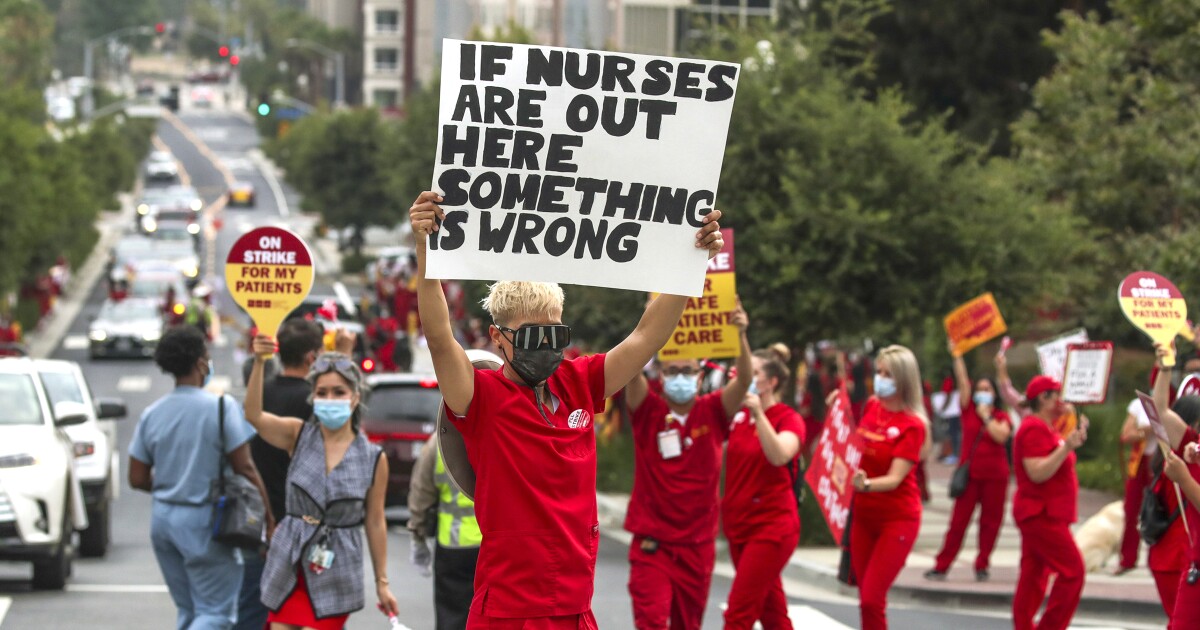 Nurses at two USC hospitals that handle some of the country’s most challenging medical cases are protesting working conditions they say put both medical staff and hospital-goers at risk, the latest in a series of strikes by nurses nationwide that have spotlighted hospital safety.

Nearly 1,400 registered nurses at USC Norris Cancer Hospital in Los Angeles and Keck Hospital of USC began a two-day strike Tuesday citing what they called unsafe working conditions that include long shifts, not enough staff and an over-reliance on contract nurses.

“We have some profound patient safety issues, and the hospital has been ignoring us and refusing to address them,” said Michael Simonton, an ICU nurse at Norris Hospital who joined the strike.

Concerns about safety at work have led nurses to strike across the country over the last year. In California, nurses have gone on strike — including San Francisco’s Chinese Hospital and Riverside Community Hospital — citing inadequate staffing as one of their primary concerns. In Worcester, Mass., nurses at St. Vincent Hospital have been on strike since March 8 — the longest nurses strike nationally in more than a decade.

“We see nurses take to the streets when their day-to-day experience tells them that patient safety is at risk,” said Carmen Balber, executive director of Consumer Watchdog, a nonprofit that advocates for patient safety.

The two USC hospitals dispute that they are understaffed or rely excessively on contractors, which executives say make up about 5% of nurses there. Annette Sy, chief nursing officer at Keck Medical Center, said the hospital is always monitoring its staffing needs and that inspections by the state Public Health Department “have consistently found us in compliance, often even exceeding” the department’s nurse-to-patient ratio requirements.

“Contract nurses undergo a rigorous screening process before they are hired and receive the same training, orientation and education as any other nurse in our organization,” she said in a separate statement.

In interviews, nurses at USC Norris and Keck said outside contract nurses often lacked the necessary skills needed to treat patients, particularly in specialty care. They are asking the hospitals to hire and train more staff nurses, give nurses with necessary skills priority over contractors, provide adequate rest periods between shifts, and offer rotations for nurses in the infectious disease units — a physically and emotionally demanding job.

“We’re asking for help,” said Valerie Hernandez, a registered nurse at Keck Hospital. “And the last thing that we wanted to do was strike, but, unfortunately, we’ve been pushed to do so.”

The USC nurses are represented by the California Nurses Assn./National Nurses United. The strike comes amid contract negotiations that began in November.

Right now, nurses have leverage. According to the American Nurses Assn., by 2022 there will be more jobs open for registered nurses than for any other profession, leaving ample opportunities for nurses who may feel unhappy with their working conditions.

At the USC hospitals, Simonton and Hernandez said nurses often worked 18-hour shifts, or four to five shifts a week, to fill gaps in staffing levels. A typical full-time nurse works three 12-hour shifts weekly. “I get a call every week from my unit saying: ‘Please, can someone work; we’re short staffed,’” Hernandez said.

Hernandez said that if the hospital couldn’t find coverage, they told nurses to “double up on ratios or downgrade a patient” to a lower level of care. “Our patients matter to us, and we stay because we know that they need us,” she said. “We’re not asking for much.”

Even if they want to leave, nurses find it ethically challenging to turn down overtime shifts. “Morally, we have to take care of these people,” Simonton said.

This issue isn’t specific to USC hospitals. Balber says she frequently hears nurses say they have more patients than they can care for, which leads to a higher possibility of human error. When units are understaffed and nurses are running on little sleep, mistakes are more likely.

Norris and Keck Hospital have some of the highest acuity rates in the country, meaning they handle the most challenging medical cases. This requires nurses to have knowledge of specialty equipment and procedures specific to the hospital. Striking nurses said that investing in full-time staff and training them was safer and more reliable than the current system.

Hospitals frequently use contract nurses to fill gaps in staffing, especially at times of high demand, including months-long stretches of COVID-19 surges over the last year and a half. At USC, nurses have raised concern that the reliance on these temporary workers further compromises patient safety.

The strike ends later Wednesday, but striking nurses will not be allowed to work until Sunday. Keck said this was because the hospitals were required to hire replacement contract nurses for a minimum of five days.