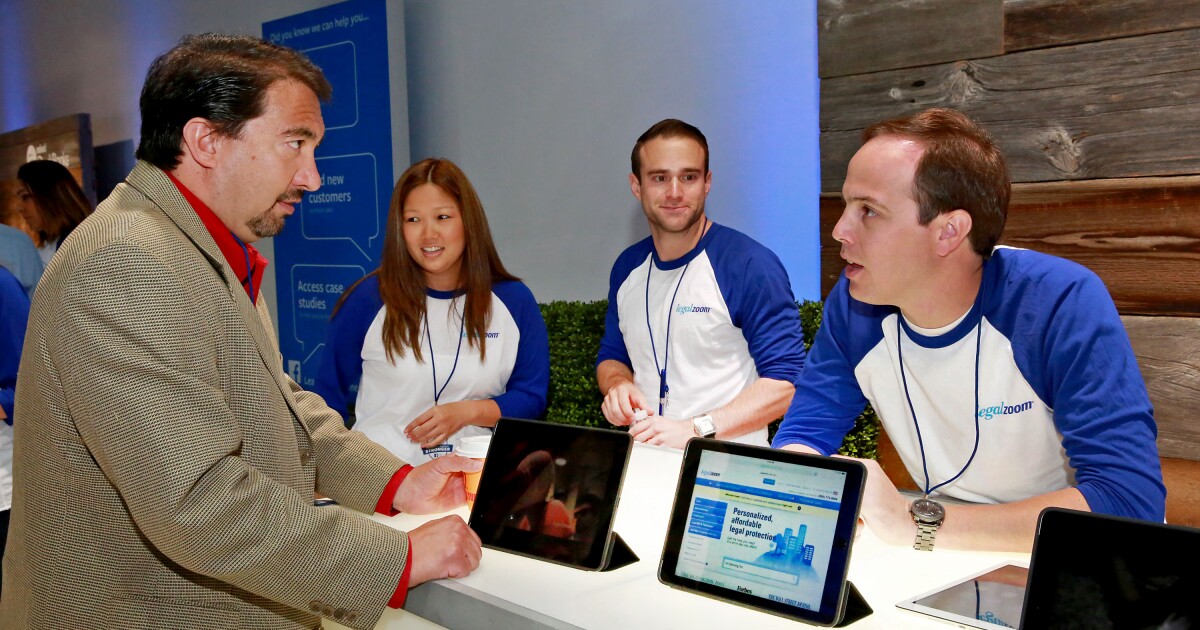 LegalZoom became a publicly traded company Wednesday on the Nasdaq stock exchange, as investors snatched up shares of the Glendale firm founded in 1999 to upend the legal world.

The stock rose to a price of more than $38 a share just after its debut at 9 a.m. Pacific — well above the asking price of $28, rocketing the valuation to more than $7 billion in its first moments as a public company — and ended the day just slightly lower at $37.85.

LegalZoom counts 1 million small businesses as customers for its subscription services, along with millions of users who come to the site for help with estate planning, divorce documents and intellectual property filings, among other legal services.

But the company’s stated mission, “to democratize law,” has often put it in conflict with lawyers groups across the country since its founding, and its future success depends in part on disrupting the staid legal profession.

In the U.S. in 2020, 10% of new limited liability companies and 5% of new corporations were formed using LegalZoom services, according to the company’s filings in preparation for its IPO. The company’s business model relies on those founders coming back for more business services as their companies grow — instead of hiring lawyers to perform those services.

In a conversation with The Times minutes after the stock began trading, LegalZoom Chief Executive Dan Wernikoff explained why the company went public now, what it plans to do with its new pile of cash, and why he thinks online legal services and lawyers can work together to make the law more accessible for everyone. This interview has been edited for brevity and clarity.

Congrats on going public, and that opening price.

Yeah, good strong open. Our initial range was $24 to $27, and we raised the target, and, yeah, the opening trade I believe was a little bit more than $36, and it’s gone up from there.

What are you going to do with the money you just raised?

I joined two years ago with the strategy to recharge growth, and this is a recognition of what we’re trying to do: raise cash, pay down our debt, have cash on the balance sheet and really think of that as a tool to accelerate our growth.

Also, this is a 20-year-old business, so there’s a little bit here of making sure we’re rewarding our existing shareholders, but also thinking how we can attract more employees. We really want to be competitive, and we’re hiring a ton.

So the plan is to keep growing. After 20 years, is there still open market share for the taking?

Oh, yeah, we estimate the serviceable addressable market — the people who consume legal services today in the areas we offer it — is close to $49 billion. If you do the math here, we have less than a [percentage] point of penetration.

Almost all legal services — 92% of them — are delivered offline, which is really different than any other industry. If you think about financial services or healthcare, it’s odd there haven’t been more people adopting legal services over technology.

Is the goal to automate the legal profession and disrupt how lawyers do business?

It’s actually not to automate legal services. In a lot of ways, for people who are self-directed, we’re helping them complete their transactions with more confidence. They can do a lot of the things we offer today directly with government agencies.

The real opportunity isn’t to disrupt attorneys, it’s much more to make attorneys more efficient. We have our own independent network of attorneys that provides legal advice through our platform, and they can do it at a lower cost and more efficiently than if they were working in their own practice.

You’ve faced opposition from lawyers groups and a number of lawsuits over the years over claims that online legal services amount to the unauthorized practice of law. Do you think that’s going to continue?

Unauthorized practice of law has been pretty well settled at this point through the court system, so we feel really good about our service not running afoul. If anything, I think [state attorneys general] and different legislators are now looking at the legal system and feeling like it’s just not accessible to most people, that it’s too expensive, so a lot of people avoid it.

Multiple states now are trying to change the rules so a corporation can own a law firm and split fees with attorneys, very specifically because they believe that costs will come down. That’s already happened in Arizona, there’s a five-year sandbox in Utah, and 15 states are actually considering the same legislation. I think we’re on the right side of this debate because we’re just trying to get people access to legal services who today really don’t feel like they can afford it.

Why would allowing corporations to own a law firm bring down costs and improve access?

The thought is if you allow a corporation to own [a law firm], they’ll be able to hire really strong talent that can actually build out the technology platform itself. And if you enable revenue sharing, then you actually are incenting people to reduce price as much as possible — and disrupt attorneys that decide not to adopt technology.

So what’s the plan for the next year? Bringing in more small business subscribers?

We’re focused on all things small business. More specifically, we’re focused on the moment when people are forming. Right at that moment you’re not just creating an entity. You’re also thinking through things like what are the tax implications, what insurance do I need, what business license do I require?

There’s a whole set of hurdles thrown in front of small businesses; our objective is to remove each one right at that moment.

How did the pandemic affect the small-business clients you work with?

It’s been a tale of two cities. If you think about existing businesses as the pandemic hit, we saw a lot of businesses pause and fail.

But what’s really inspiring about small business is you also saw a pretty significant acceleration in formation itself. As people were in shelter-in-place at home, I think there was a significant discovery of the digital tools that are out there which make it very simple from an operational standpoint to launch an e-commerce business, or to sell your crafts online, or participate in some sort of gig platform. It used to be that you’d have to go out and get a loan and think about real estate. Now you can launch a business in a matter of weeks with almost no money upfront; it’s leveled the playing field

You said you plan to hire with the new cash on hand. Is the Glendale office still the core of the company?

We do more hiring in Glendale than anywhere else — we also have a contact center in Austin, Texas, and a product center we’ve opened in Silicon Valley, and we plan to open more sites over time.

But our team in Glendale is the lifeblood of the company. We have people who really understand the legal domain, we have a great engineering team, we really have the foundation there. But one of the things as we continue to grow is we’ll hire in all locations because we’re getting very comfortable with remote work and the concept of collaborating online.

Any last thoughts on IPO day?

A day like this, you do reflect a bit. This company has had a long history, and I’d say an incredibly innovative history. It’s a crazy idea to put legal forms online; people don’t think about that. Back in 2000? That was a really disruptive idea that has become the foundation of what could be a world-class small-business provider.

So I thank those guys, the original founders. We just want to continue with that legacy and keep growing this business.