The iconic Hearst estate in Beverly Hills lists at $89.75 million — a deep discount

The iconic Hearst estate in Beverly Hills lists at $89.75 million — a deep discount 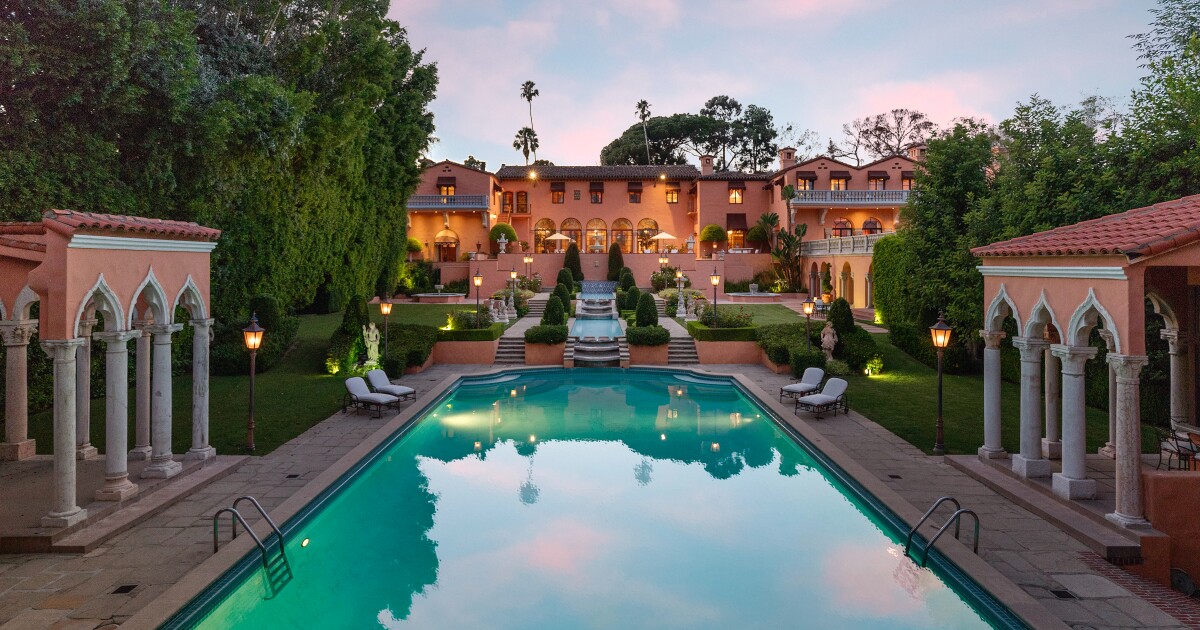 As Southern California’s red-hot real estate market sees homes selling for hundreds of thousands of dollars over the asking price, one of the region’s most legendary properties is hitting the market at a massive markdown.

A bankruptcy court is forcing the sale. The home’s longtime owner, attorney Leonard Ross, once tried to sell the trophy property for $195 million in 2016, but has since racked up a debt of more than $50 million on the estate. As a result, he put the property into bankruptcy, and the lender, Fortress Investment Group, petitioned the bankruptcy court to force a sale and succeeded.

It’s the latest update in a nearly century-long saga that has seen the estate play host to politicians, business magnates and celebrities and even appear on the silver screen, most notably in “The Godfather” and “The Bodyguard.”

It was built in 1927 by Gordon Kaufmann, the decorated architect behind the Hoover Dam, Greystone Mansion, the Hollywood Palladium and the former Los Angeles Times building in downtown Los Angeles. He designed it for local banker Milton Getz, and it was later bought by publishing magnate William Randolph Hearst and actress Marion Davies. In 1953, Jacqueline and John F. Kennedy spent their honeymoon on the romantic 3.5-acre spread.

Also known as the Beverly House, the salmon-colored home is shaped like an H and holds eight bedrooms, expanding to a variety of patios and balconies. Various structures, including two guesthouses, a pool house and a two-story gatehouse, tack on an extra 7,000 square feet.

Anthony Marguleas of Amalfi Estates shares the listing with Gary Gold of Hilton & Hyland and Zizi Pak of Rodeo Realty.

A forced bankruptcy sale of such a notable property is rare, but not unheard of. Last month, The Times reported that spec developer Nile Niami owes more than $110 million on “The One,” a 100,000-square-foot mega-mansion he’s building in Bel-Air. His lender, Hankey Capital, served him a default notice on the property in an attempt to force it onto the market.

Tags: Los Angeles News
Previous Story
Column: Stop grousing about vaccine ‘passports’ — they’re the key to reopening society
Next Story
More than 2 million Californians may be leaving stimulus money on the table. Here’s how to get it