These are L.A.’s new million-dollar neighborhoods

These are L.A.’s new million-dollar neighborhoods 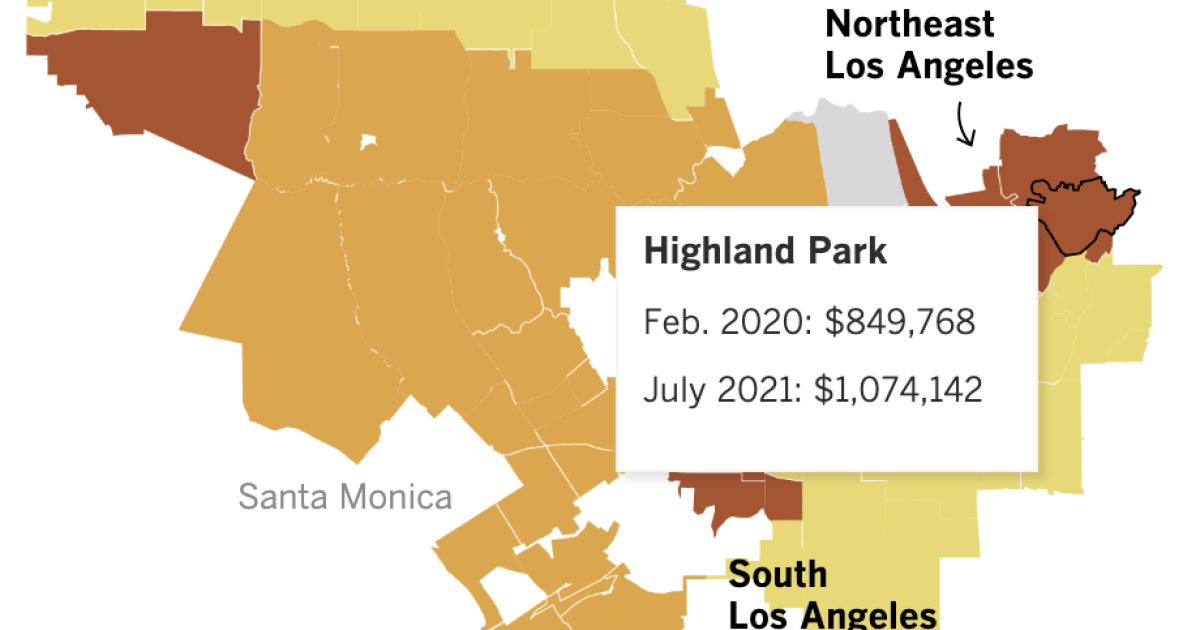 There have never been so many $1-million houses.

No longer limited to Santa Monica, the Hollywood Hills or the beach towns of Orange County, the $1-million house is popping up across Southern California, spurred by demand for bigger spaces during the pandemic and the resulting surge in home prices.

In 55 cities and unincorporated areas in Los Angeles and Orange counties, the typical house is now valued at $1 million or more, according to Zillow, which defines typical as the average of roughly the middle one-third of home values in a given area. Seventeen of those places — including Altadena, Torrance and Fountain Valley — surpassed $1 million since March 2020, when COVID-19 began to grip the United States.

In the city of Los Angeles, the neighborhoods that crossed the $1-million threshold for the first time are largely in three areas: northeast Los Angeles, South Los Angeles and the San Fernando Valley.

With its central location, Arlington Heights is one of the earliest neighborhoods on this list to reach the $1-million mark, hitting it in April 2020 just after lockdown orders were issued. Space is at a premium there, so most homes are two stories tall, and there’s an even mix of single-family homes, duplexes and multifamily properties.

A long, slender neighborhood that runs along Griffith Park and the L.A. River, Atwater Village got the “trendy” tag in the last decade — and prices rose as a result. Its housing stock can be divided into two types: old homes in need of some work listed for less than $1 million, and remodeled units that developers are flipping for anywhere from $1.2 million to $1.7 million.

Home values in the South L.A. neighborhood of Crenshaw have doubled in the last decade. Bungalows and low-rise condo complexes are popular in the residential area, where one- and two-bedroom condos list for around $300,000 and $600,000, respectively, and remodeled homes sell for well over $1.5 million.

A $1-million neighborhood as of November, Eagle Rock offers a quiet, suburban vibe nestled against the northeast border of Los Angeles. There’s a handful of bungalows up for grabs in the $900,000 range, but most homes with more than 1,500 square feet will run well north of $1 million.

Whatever it is you’re looking for, chances are you’ll find it among the dense streets of Echo Park. Another neighborhood rising in trendiness in recent years, it has plenty of fixer-uppers as well as fresh flips that often list for $2 million or more.

Yet another hilly northeast L.A. neighborhood to join the club, Glassell Park has more empty lots on the market than homes. Those that are for sale usually resemble a bungalow and cost $800,000 to $1.3 million.

As bidding wars rage for the homes of Highland Park, it’s no surprise that Hermon, the tiny neighborhood that sits just south of it, is growing more expensive as well, with a typical home value of $1.1 million.

The homes of Highland Park have risen in value 37.5% more than in the city of L.A. as a whole since 2012, and there are no signs of a slowdown. Two-bedroom bungalows may list for less than $1 million, but bidding wars throughout the pandemic often drove the final price up hundreds of thousands of dollars.

Spanish Colonial Revival-style architecture is alive and well in Leimert Park, a South L.A. neighborhood developed in the 1920s. Older properties usually list in the $700,000 range, while the slick remodels might fetch $1.1 million.

Spread across the San Rafael Hills, Mount Washington’s homes with good views have consistently gained value over the last decade. There’s lots of land available if you’re looking to build something from scratch, and also a decent number of two- and three-bedroom homes listed for less than $1 million.

Porter Ranch is the most recent San Fernando Valley neighborhood to join the million-dollar club, with the typical home value hitting more than $1 million in May. The winding streets are lined with tract homes built since the 1960s, and today those homes sell for $700,000 to $3 million.

The Valley is slowly welcoming more and more $1-million neighborhoods, and Shadow Hills joined the list in April. Of the 12 homes on the market there as of Tuesday 9/21, most are bigger than 2,000 square feet — and if you’re willing to pay more than $1 million, you can usually get an equestrian estate with a riding arena for your horses.

One of the more architecturally interesting neighborhoods on this list, West Adams features $600,000 fixer-uppers on the same streets as modern duplexes and triplexes that sell for nearly $2 million. It’s also the most recent area to join the club, hitting the $1-million mark in July, a decade after the typical home value was just $319,844.

Like many of its San Fernando Valley counterparts, Woodland Hills has plenty of space and views, with a handful of homes nestled in the foothills of the Santa Monica Mountains. Condos start at $300,000, but the American dream house — that single-family home with a white picket fence and front yard — costs between $1 million and $3 million.