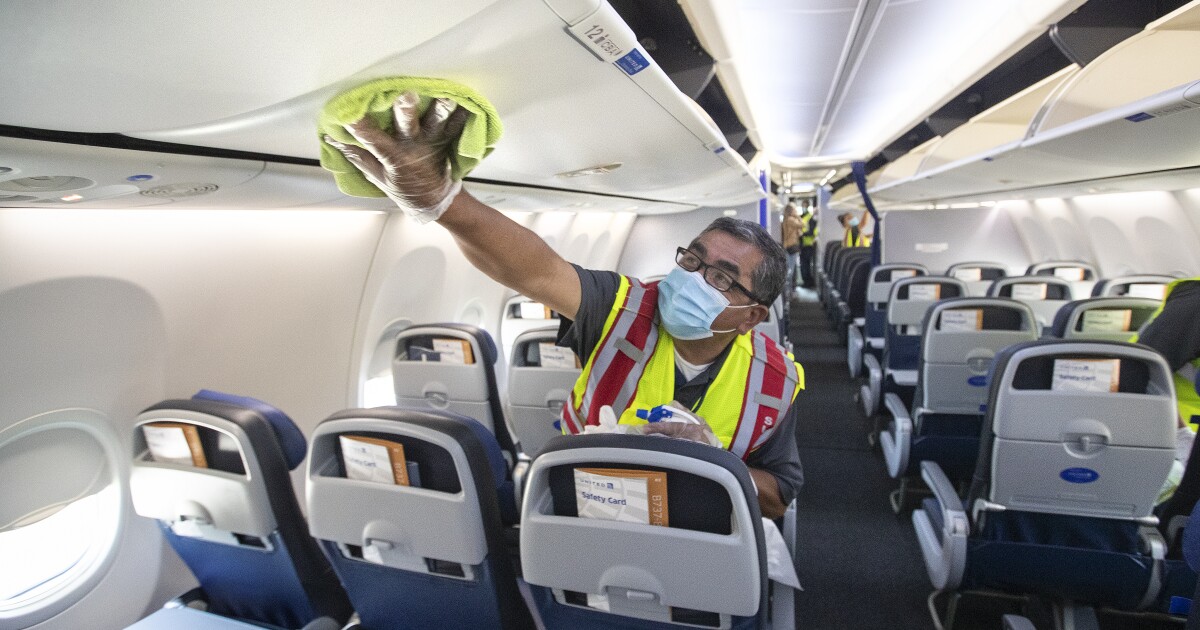 As travel bounces back from the pandemic, there’s a rift emerging in the airline industry over employee vaccination mandates.

Hawaiian Airlines joined Frontier and United Airlines this week in announcing a policy of requiring employees to be vaccinated against COVID-19. Delta, American, Alaska and Southwest Airlines have made it clear through statements and internal memos that they are not requiring vaccination even though they are encouraging it, with some offering incentives for workers to get the shots.

Industry experts disagree on whether this divide — which has materialized amid a rise in coronavirus cases across the country — will be a deciding factor for Americans who are choosing to fly.

As an example, he noted that most passengers didn’t boycott the Boeing 737 Max despite two fatal accidents that grounded the plane for nearly two years.

But UC Irvine economics professor Jan Brueckner disagrees, saying virus-leery fliers are likely to steer away from those airlines that are not willing to mandate vaccinations for workers.

“There are a lot of nervous passengers out there,” he said. “If I was on the edge between American and United, I would pick the one with the vaccine mandate.”

Zane Kerby, president and chief executive of the American Society of Travel Advisors, a trade group for travel professionals, said he was skeptical that vaccine mandates would make a significant difference in booking preferences.

On social media, many travelers applauded the United mandate announcement, saying it will sway them to choose the Chicago-based carrier. Others criticized vaccine mandates but didn’t voice support for those airlines that were not adopting such mandates.

Business travel, which generated most of the airline industry’s revenues before the pandemic, has yet to rebound, he said, and many of the biggest corporations are locked into agreements to fly with a specific carrier at a discounted rate.

The vaccination policy split comes as air travel demand begins to climb almost to pre-pandemic levels. Domestic air bookings reached about half of pre-pandemic levels in March and has since climbed to 17% below those levels in early August, according to Airlines for America, a trade group for the nation’s air carriers.

In response to the increased demand, airlines are adding new routes, reopening airport lounges and expanding service to existing destinations.

United announced last week that all of its roughly 67,000 employees must be vaccinated by Oct. 25.

“The data and the evidence is unequivocal that getting vaccinated is safest for each individual and safest for their co-workers,” United CEO Scott Kirby said in an NBC News interview.

Frontier workers have until Oct. 1 to be vaccinated. Frontier employees who choose not to or are unable to get vaccinated will be asked to provide proof of a negative coronavirus test result on a regular basis.

Hawaiian Airlines announced the mandate in a memo to staff Monday, with a deadline of Nov. 1. Employees who don’t get the vaccine will be required to be tested regularly.

Meanwhile, Delta, American, Alaska and Southwest have issued statements saying they are encouraging their employees to be vaccinated but are not planning to mandate the shots.

Delta said in May that it would require new employees in the U.S. to be vaccinated effective May 17. The carrier is “strongly encouraging” other workers to get vaccinated but isn’t mandating it. More than 73% of its roughly 75,000 employees are already vaccinated, airline representatives said.

American Airlines said the carrier was also encouraging employees to get vaccinated, and is offering an additional day off in 2022 and $50 for those workers who get the vaccine.

Alaska Airlines issued a statement saying, “While we currently don’t require employees to be vaccinated, we’re exploring all options to keep our employees safe.” But this week, the carrier released a new statement saying, “Due to the highly contagious COVID-19 Delta variant, we are looking closely at whether we will require that employees are vaccinated. If we do, the requirement would not be effective until at least one vaccine is fully approved by the FDA and would include appropriate religious and medical exemptions.”

Aviation employee groups have announced support for vaccinations but have not committed to mandates.

The Air Line Pilots Assn., which represents more than 59,000 pilots from 35 U.S. and Canadian airlines, said employer mandates on vaccines were “an issue that must be bargained, and we strongly support our individual pilot groups as they engage with their companies on this issue.”

In response to United Airlines’ mandate announcement, the Assn. of Flight Attendants, representing about 50,000 flight attendants at 20 airlines, said it supported a voluntary vaccination program. About 80% of the group’s members are already vaccinated.

“The safest thing for us to do is continue our layered approach to this pandemic: getting vaccinated and wearing a mask!” the union said in a statement.