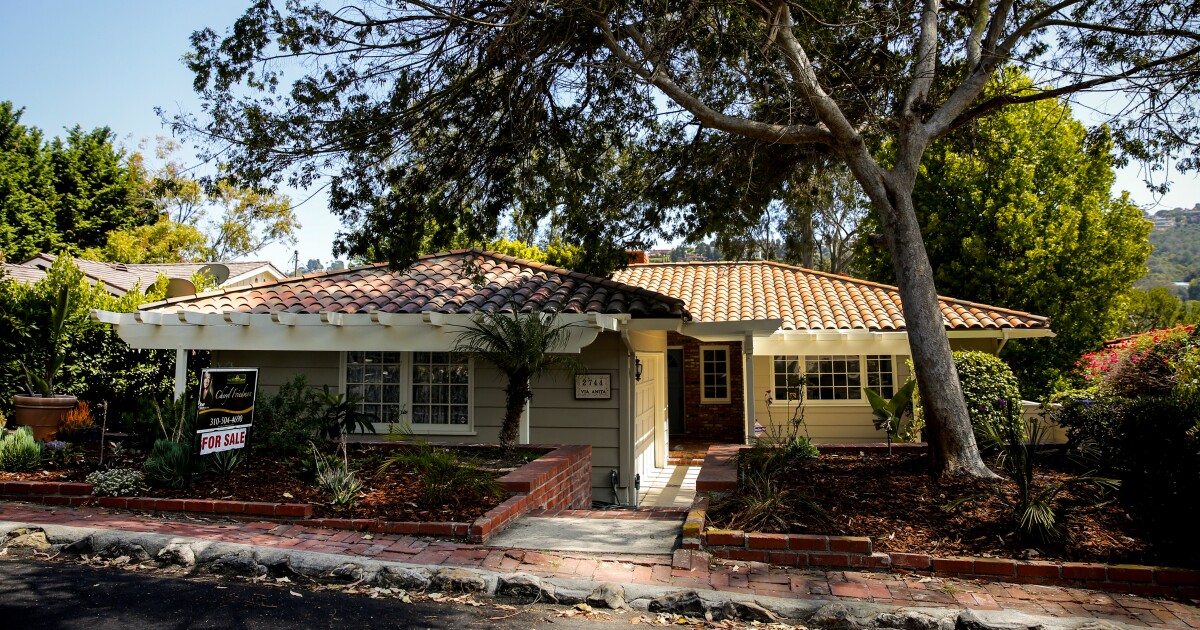 A bill advancing through the California Legislature to allow for denser home building in single-family zones would be likely to produce an uptick in the state’s housing supply, but the so-called upzoning probably won’t cause mass redevelopment, according to a report published Wednesday.

The study by the Terner Center for Housing Innovation at UC Berkeley offers the most detailed analysis yet of the potential effect of Senate Bill 9, designed to allow up to four homes on most single-family lots and spur the construction of badly needed new housing.

4:49 p.m. July 21, 2021A previous version of this article said Livable California submitted an opposition letter to Senate President Pro Tem Toni Atkins. The letter was submitted to a different legislator.

Because of the way unit development would pencil out, the study found that “the vast amount of single-family parcels across the state would not see any new development,” said David Garcia, policy director at the Terner Center, which supports the bill written by Senate President Pro Tem Toni Atkins (D-San Diego).

SB 9 passed the state Senate and is expected to be taken up in the Assembly Appropriations Committee by Aug. 27. If approved, it would go to a final vote in the Assembly and then to Gov. Gavin Newsom’s desk. The Terner Center study found that, under the bill, a total of 714,000 new homes would make financial sense to build, and it would take years to build them — if they ever are, since not all homeowners would want to sell or develop their own property.

It would make financial sense for property owners to add those homes on 5.4% of the state’s 7.5 million single-family lots — or 410,000 parcels now zoned for only one traditional, single-family house. In L.A. County, a slightly higher proportion of single-family lots, 6.7% of the total there, would make sense to add units on. Garcia called the bill “a modest reform.”

“It will make a modest but important impact [on supply] over time,” he said.

The Terner Center, whose research focuses on how to increase housing supply, reached its estimates by examining construction costs, land values, parcel size, market rents and home prices, as well as other factors. It analyzed several potential scenarios, including converting an existing house into a duplex, keeping the house as is and putting a unit or two in the backyard, or demolishing the house and building up to four new homes.

The report’s findings add to the long-running debate about the merits of allowing more density on the traditionally prized single-family lot, an emblem of the California homeownership dream.

Proponents say SB 9 would add needed supply to ease a housing shortage — decades-long in the making — that has driven up California home prices and rents, but do so in a gentle way that’s largely compatible with each neighborhood‘s character. They also argue many of the units are likely to be smaller than the existing house and, accordingly, more affordable, bringing online more attainable options in areas near jobs and good schools.

But the bill has drawn strong opposition from many cities and single-family homeowner groups across the state, which say they fear it would destroy quiet neighborhoods with large, out-of-scale projects. And they say it would do so while not providing housing to those most in need and, in some cases, would accelerate gentrification.

The arguments are similar to those that killed high-profile bills to erode single-family zoning in recent years, including the controversial SB 50, which would have allowed fourplexes in most single-family zones and, in some cases, larger apartment buildings in those neighborhoods.

California’s housing shortage is between 820,000 and 3.5 million — a huge gap that the Terner Center said is unlikely to be filled by SB 9 alone. Garcia still characterized the bill as helpful, even though it doesn’t mandate that new units be restricted to some level of affordability. That’s partly because a wide body of research shows that adding to housing supply, even at market rates, helps moderate housing costs regionally, he said.

Livable California, a statewide group advocating to preserve single-family zoning, has called SB 9 a “bulldozer bill” that’s “the beginning of the end of homeownership in California.”

In an opposition letter, the organization said upzoning single-family lots would raise the land value of those homes and make it harder for first-time buyers to get their foothold into the American dream as they are forced to compete with deep-pocketed investors looking to build more units.

The group argued developers are likely to target Black and Latino communities in areas where land is cheaper, and demolish houses to build high-cost rentals that would limit the ability of people of color to build wealth.

“I see very expensive … rental units coming from this bill,” said Isaiah Madison, a board member with Livable California who lives in South L.A., adding that the homes won’t be affordable to large swaths of the existing community. “If this is happening in affluent communities, the affordability isn’t going to be as far off.”

The group also says language in the bill would allow property owners to build six units on what is today a single-family parcel, because they could double-dip between SB 9 and the accessory dwelling unit law, which already allows for a backyard home and a third small unit to be built. Atkins’ office said such a scenario is not possible and the senator has repeatedly said four units is the maximum allowable.

The Terner Center used the four-unit maximum in its analysis and did not break down the potential effect in individual neighborhoods, meaning some areas could see more intense development than the state or county as a whole.

Significantly, the bill doesn’t outlaw single-family houses, nor does it mandate development. It would only make possible multiunit construction on certain lots that isn’t possible under current law. Garcia said land and construction costs are so high that it’s difficult to make money on many of the lots, and thus fewer homeowners and developers are likely to try to build.

Under the bill, cities must approve up to two units on a lot currently zoned for one single-family house if a property owner asks to do so. Cities must also approve a lot split and allow two additional units on the new lot, for a total of four.

But the bill exempts rural areas, historic districts and properties where a tenant has lived for at least the last three years. Cities can still impose design standards, including height limits, as long as those standards allow units of at least 800 square feet; property owners can’t split adjacent lots — all measures that limit the number of parcels that make financial sense to redevelop.

Cities could also prohibit demolitions if they wish, Atkins said.

The Terner Center did not factor that possibility into its analysis because Garcia said the bill doesn’t explicitly say that’s possible. Regardless, nearly 97% of all single-family homes would not make financial sense to demolish, either because no development made sense on the lot, or the more attractive option was to convert the house into a duplex or simply put an additional unit or two in the backyard.

Supporters say SB 9 builds off recent reforms the state made to allow more accessory dwelling units, or ADUs, and emphasize the opportunity the new bill provides to homeowners, rather than developers.

Under existing ADU law, most owners can now build a backyard home of at least 800 square feet and convert a portion of their house to a third unit, as long as it isn’t larger than 500 square feet.

SB 9 differs from that because it allows an additional unit, as well as different types of housing, including newly constructed duplexes or even four single-family houses or townhomes. By allowing what’s called a lot split, the bill would also make it easier for a property owner to sell a new single-family house, duplex or even ADU, rather than rent what they built — something the bill’s proponents say would allow homeowners to immediately gain wealth, while at the same time offering a wealth-building opportunity to others.

A lot split also makes it easier for homeowners to finance ADU construction, the Terner Center said. That has been a hurdle for lower-income owners.

Cities are also allowed to mandate that someone applying for a lot split live in one of the units, which the Terner Center estimated would reduce the number of feasible new homes by 6%, or 40,000.

The analysis didn’t say how expensive new homes under SB 9 must sell or rent for in order to be financially feasible, nor did it provide an analysis on whether for-sale or rental homes would make the most sense.

Many developers like to maximize the scale of their projects so they can make more profit. And in some cases, Garcia said developers will probably demolish a small bungalow and replace it with multiple homes that are larger. But he noted the analysis showed only about 3% of homes make sense to demolish for new development if SB 9 passes.

In cases in which a home is demolished, Garcia said, local design rules should mean many of the new units will still be smaller than the original house.